Looking forward to sunshine and warmer temperatures, I decided to take on a project over the weekend to build a small raised bed so we could try planting some peppers and herbs this spring. My wife asked that the bed be around 18” tall. I went to work in my project notebook and came up with the following hand sketch: 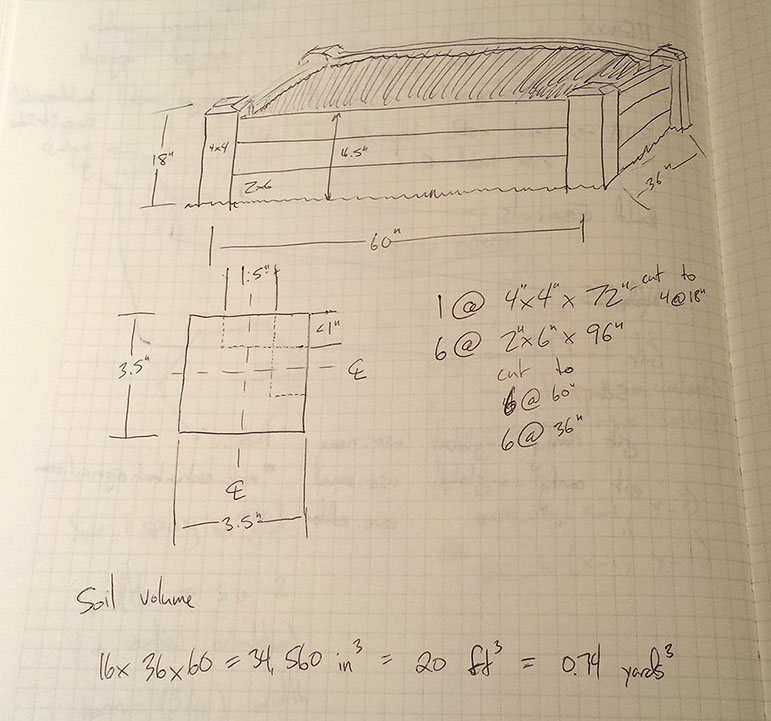 I wanted to use 4” x 4” posts for the corners and 2” x 6” boards for the walls of the planter box. There were a couple of design elements that I wanted to incorporate. First, I wanted the 2” x 6” boards to be recessed into the post. Also, I wanted to put a 45 degree chamfer on the top of each 4” x 4” for decoration. I decided that the overall dimensions should be around 36” x 60” so I could maximize utilization of the 8 foot lengths of the 2” x 6” stock board size.

I went to Home Depot to source the lumber. I found all of the boards to be quite wet as if they had just been brought in from outside and tried to find boards that were relatively straight. Turning the boards vertically and looking down the edge makes it easy to identify which ones were straighter.

The boards were cut to the following dimensions and quantities:

I asked that the sawyer cut the pieces the same size. I did not care that the pieces were exactly 36” or 60”, but it was important to me that they were all the same. The parts came out with about 0.125” of variation. A more experienced sawyer using a stop on the saw, should be able to cut the parts to close tolerances. 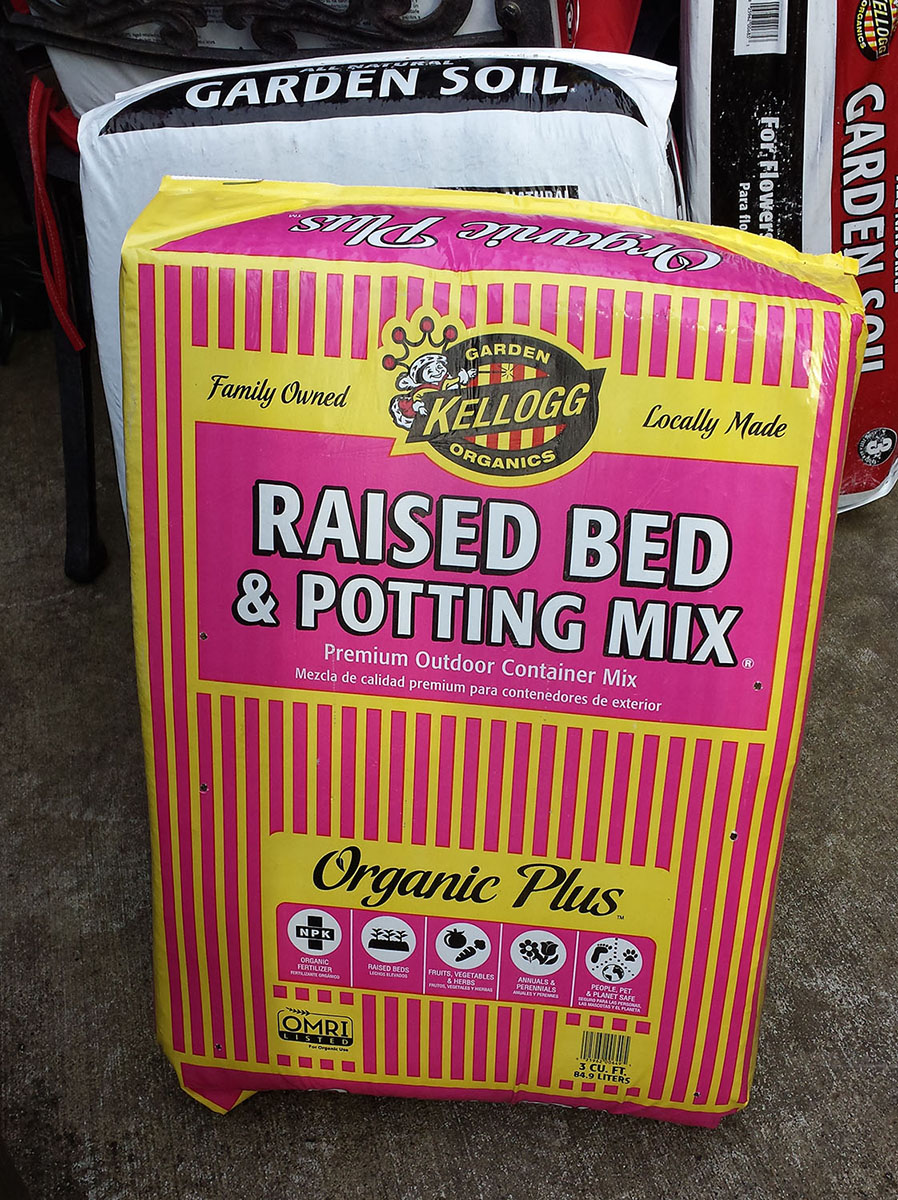 I also purchased potting soil, which is sold in 3 cubic foot bags at Home Depot. The soil should be be a few inches below the 18” post. Here is how I calculated the amount of soil I needed for the project:

The calculation suggested that about six or seven bags were needed. I decided to go for three bags of garden soil ($8.50 / each) and three bags of raised bed and potting mix ($10 / each). The garden soil would comprise the lower layer and the raised bed mix would be on the top.

With the boards and soil in hand, I headed home for the next part of the project.

The key to putting a slot the 4” x 4” post would be to create a small fixture that would hold the part in place during the machining process. My CNC router imparts several pounds of force into the work and it is important that the work is held securely in place to ensure a good quality part. The 4” x 4” posts were about 3.625” square. I came up with the following shop drawing: 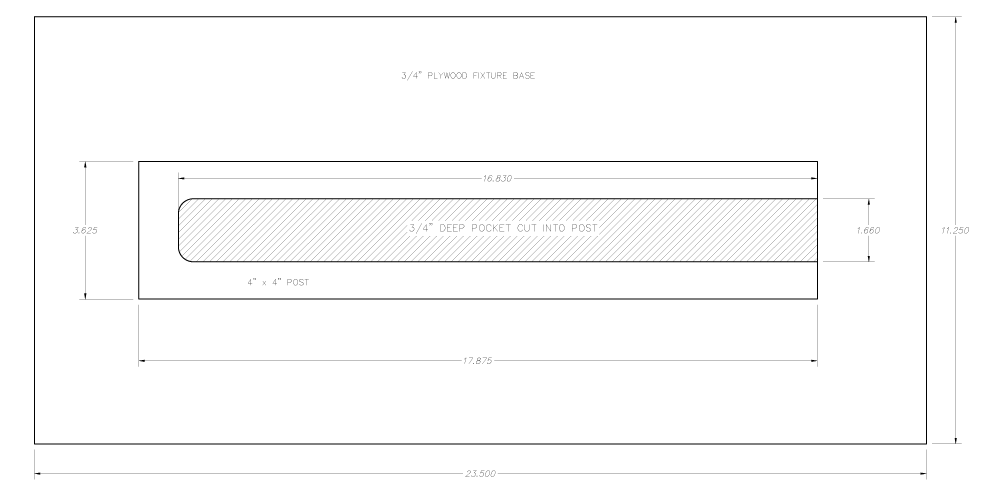 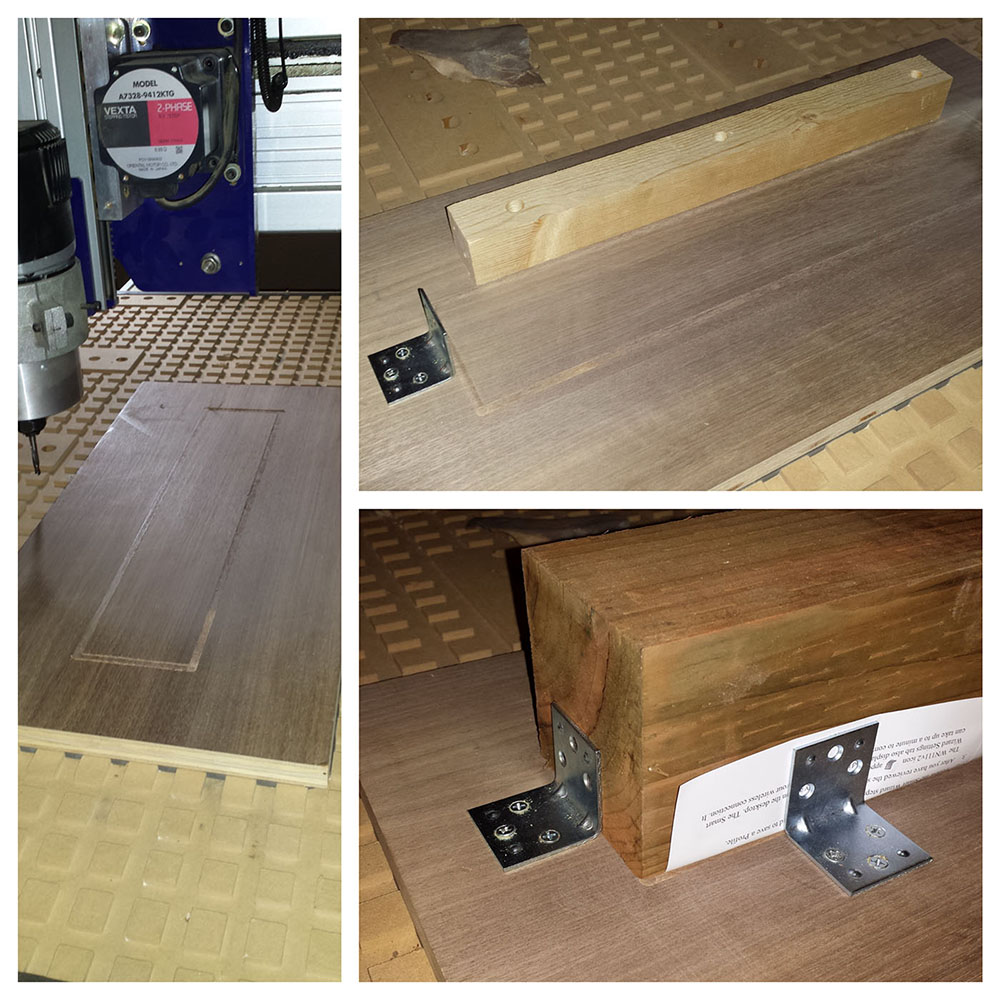 Finally I wrapped a 4” x 4” x 18” cut piece in paper and put it up against the two edges. The paper allows for about 0.01” extra spacing. Then I installed two final angle brackets ensuring a snug fit. It is important to be able to move all of the 4” x 4”s in and out of the fixture. I tested each 4” x 4” and rotated each 90 degrees in the tool.

I put two screws though the angle brackets into the work to hold it in place while the router was running. The run time was about 10 minutes per pocket. This video shows the pocket being machining:

The next operation was to put a 0.25” x 45 degree chamfer on the top of each post. This operation was performed on the manual router table: 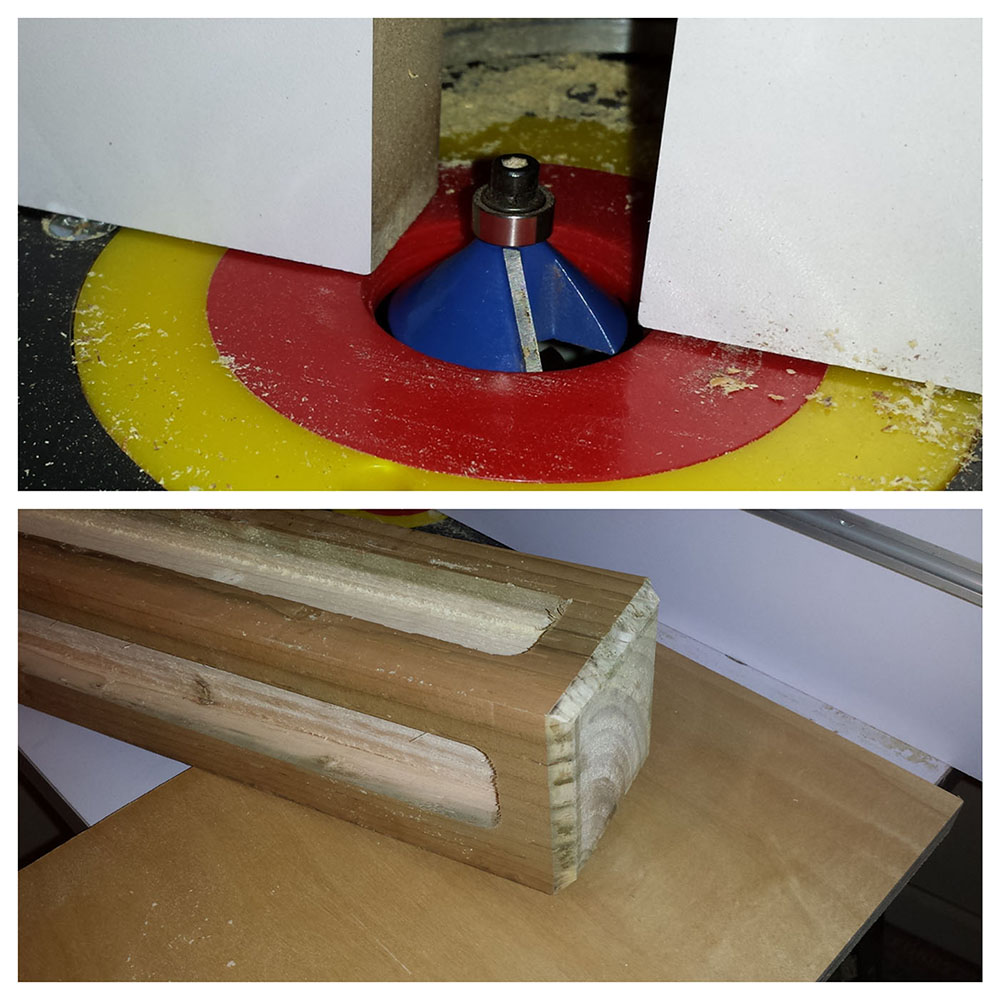 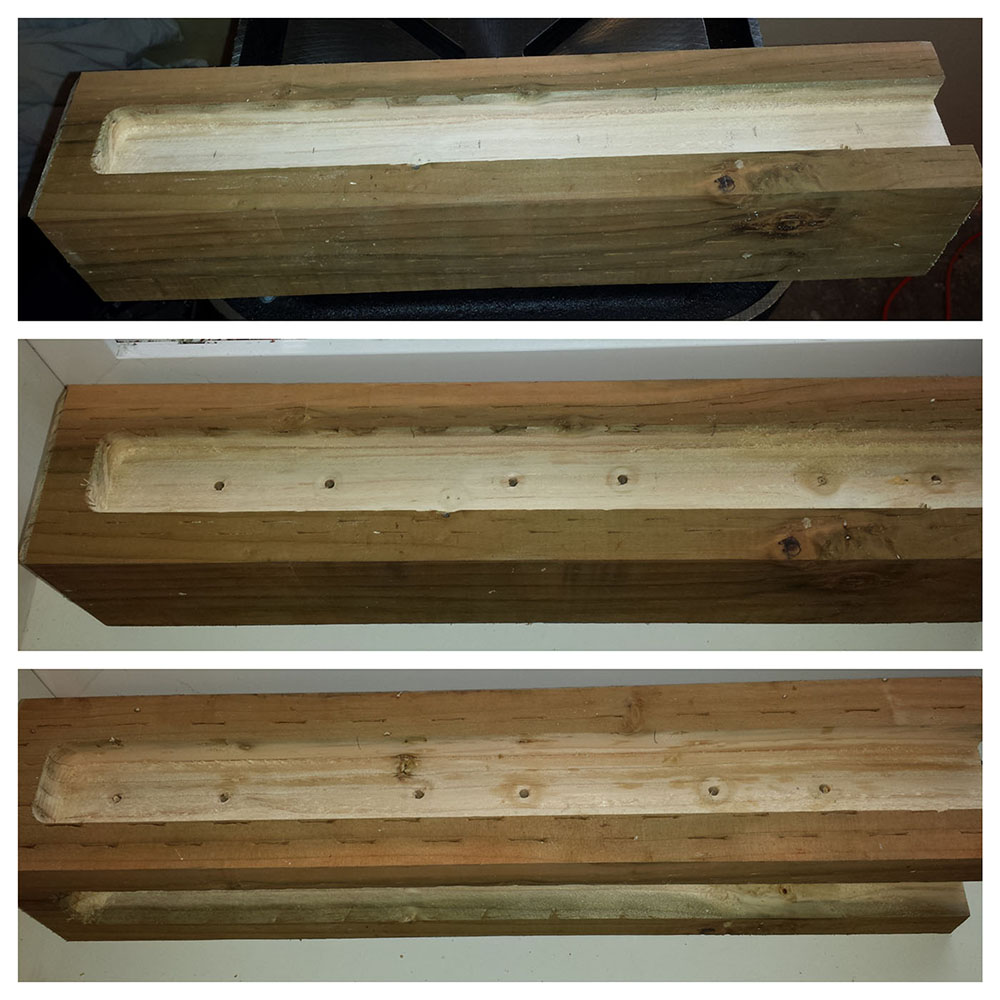 The last operation was to reverse drill the pilot holes with a countersink bit on the drill press. I recessed the countersink roughly 0.5” into the board to hide the 4” galvanized screws that I purchased. The one pound box ($7.50) contained 50 screws and I needed 48 to do the job (12 boards x 4 fasteners per board): 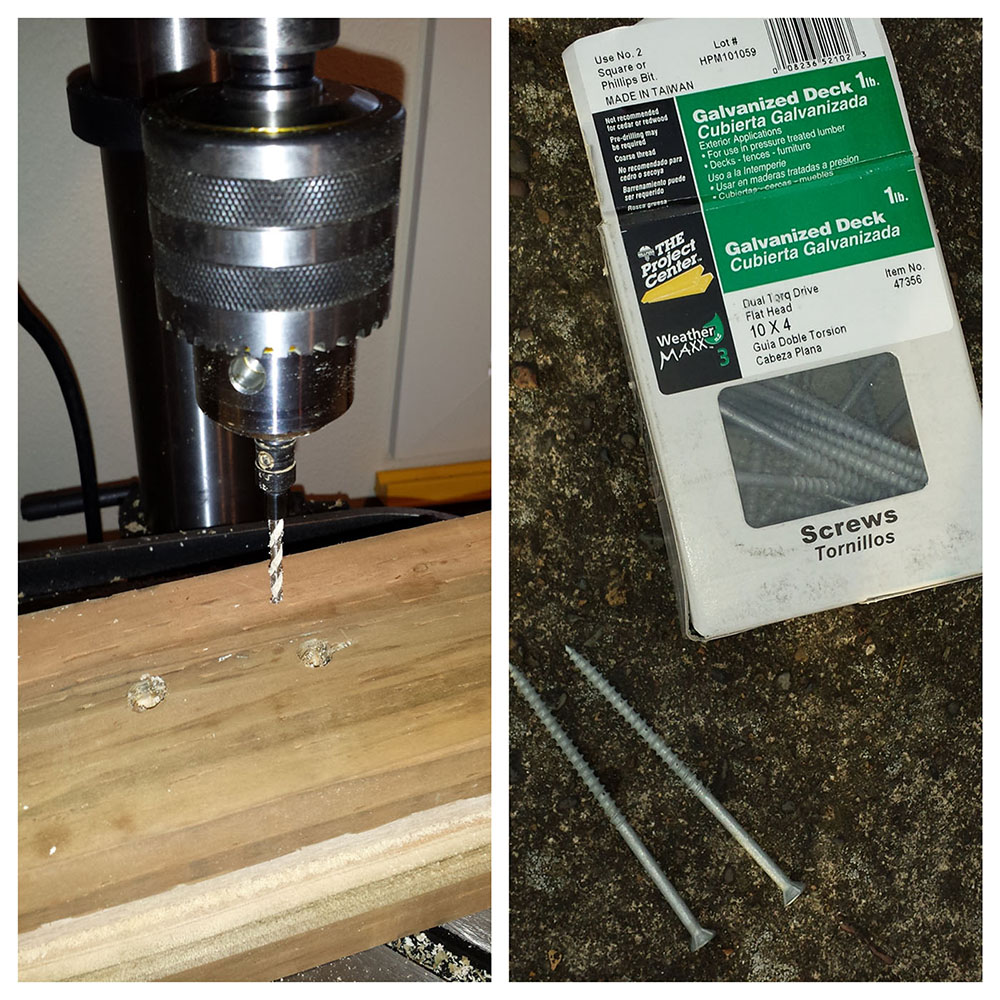 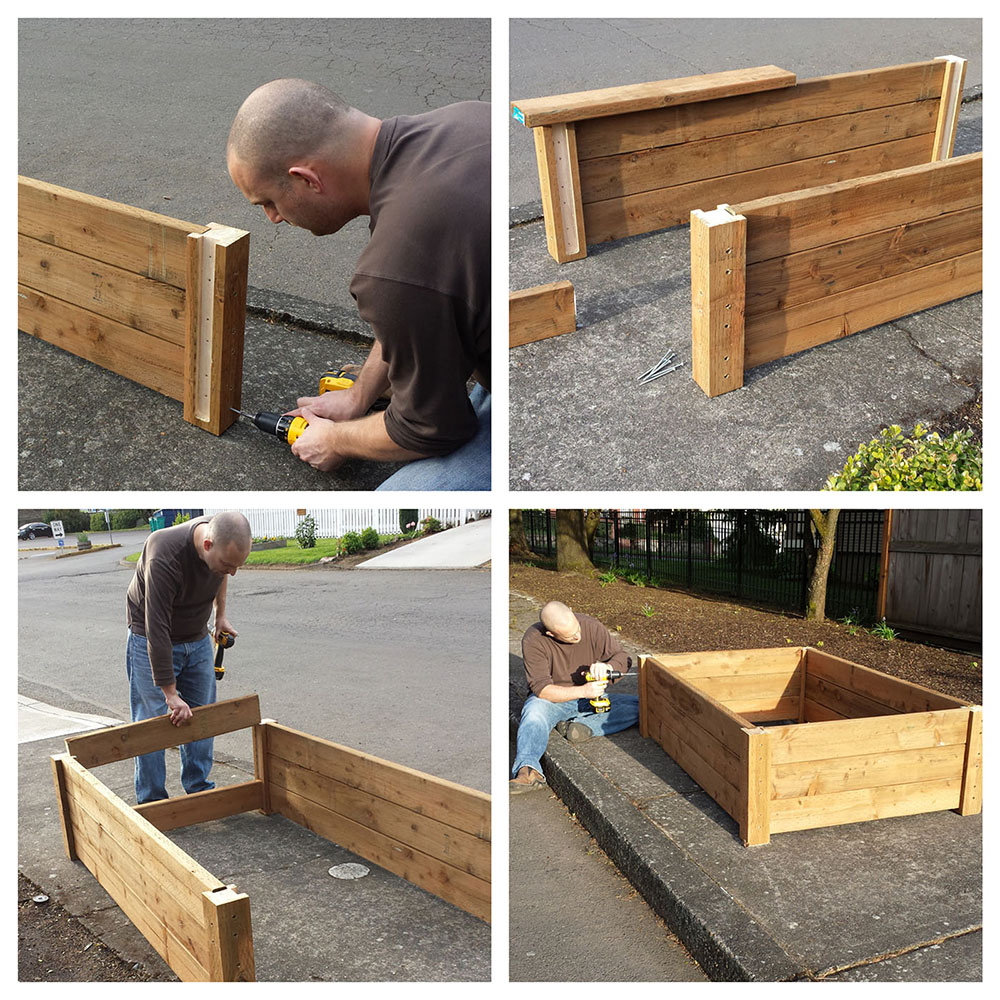 After about 20 minutes with the drill, the raised bed frame was complete. I flipped the assembly over and positioned it next to the sidewalk. We put cardboard in the bottom of the box after reading good things about it. Finally, the six bags of soil went into the box. After each bag we used the rake and a shovel to even things out. 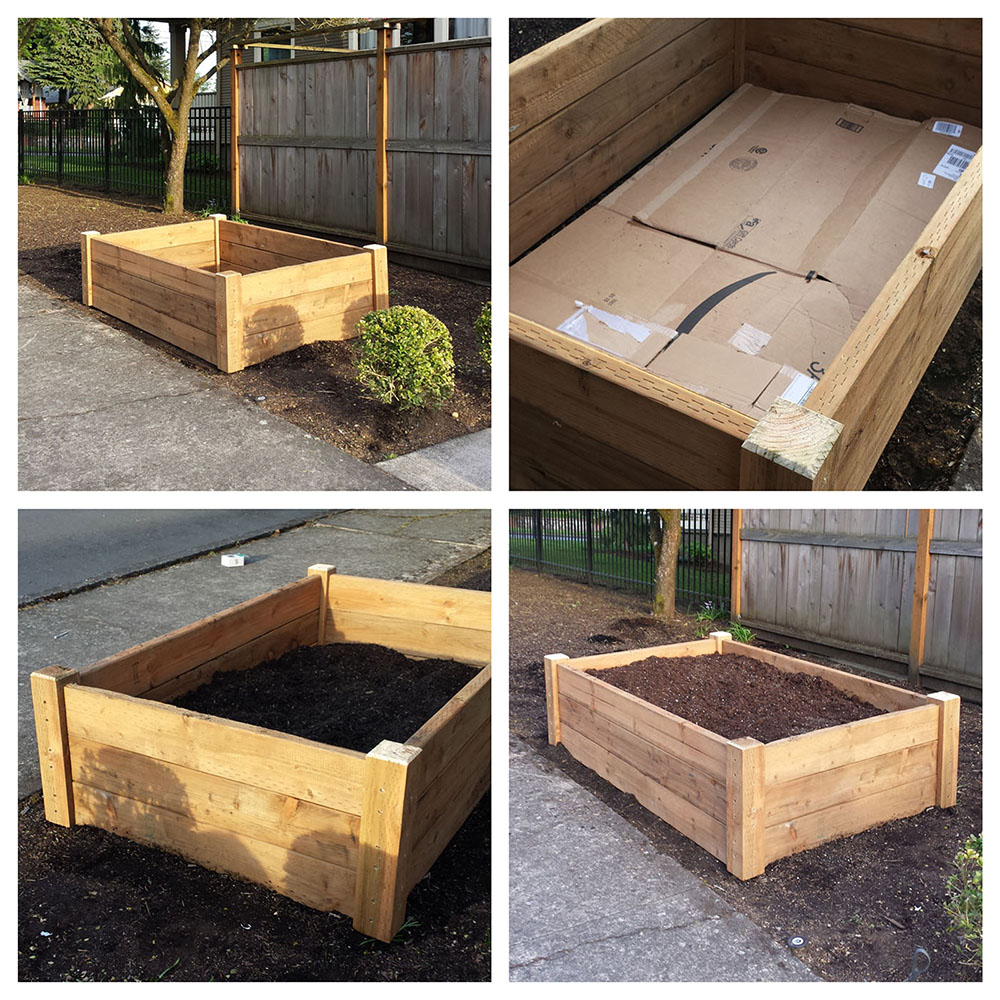 I added the resources for the two raised bed projects I fabricated on the CNC. I included the AutoCAD drawings, ShopBot and Vectric Aspire files I used on both projects: