After hearing about jRuby on several Ruby Rogues podcasts and reading posts about it online, I wanted to give it a shot.

Installation is super easy if you use rvm:

This will install several dependencies (like the patch, gawk, g++ and the JDK if you do not already have them installed). The installation and setup took about seven minutes on a clean Ubuntu 12.04 Vagrant box I spun up for testing purposes.

Specifying the package is a little cumbersome. Importing the java.lang.System makes things a little easier:

jRuby provides access to Java’s rich API and large number of open source packages. The runtime performance is approximately the same, however the memory consumption appears to be higher for jRuby programs according to a 2014 survey. It should be noted that the JVM startup time is excluded in these benchmarks so as not to bias the results. However, it is not inconsequential. I understand that JVM start time for some test suites can take several seconds for larger projects, which can be painful when running regression tests.

One of the main drawbacks to concurrent programming in MRI Ruby is that threads cannot run in parallel. These are are useful when blocking on input and output, for example. However, gems that use native C code can provide multi-threading facilities (e.g. by using POSIX threads). Another issue with MRI Ruby is that a number of data structures are not thread safe (with the exception of the Queue class).

jRuby provides access to java.lang.Thread which enables running multiple threads of execution concurrently on multiple cores. There appear to be some notable drawbacks in jRuby. Because the code runs on the JVM, we are precluded from using gems with native code. These gems need to be swapped out with alternatives. Another issue is that jRuby is several versions behind MRI Ruby. The latest jRuby release at the time this was written is 1.7.19, which was to shore up compatibility with MRI Ruby version 1.9.3.

Threads are much cheaper to spin up than processes. Access to native threads in jRuby may help developers to scale applications by better utilizing the hardware. Use of multiple threads of execution is a natural fit for web servers, which need to handle multiple client connections concurrently.

Let’s take jRuby out for a spin with a hello world example that utilizes JFrame:

If you save this as a file called hello.rb then it can be run from the command line by:

Here is the app in action: 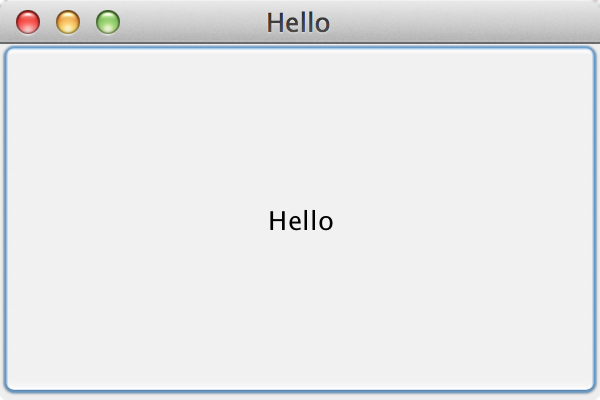 The action listener do ... end Ruby syntax is quite a bit cleaner than the Java alternative using an anonymous inner class:

Taking what I learned and hungry for more, I decided to write a minimal web browser using jRuby. The interface is comprised of a JTextField to input the URI and a JEditorPane to render the HTML. In addition, I use BorderLayout as the layout manager for the JFrame:

While JEditorPane HTML support is very limited, we are able to display the webpage data for example.com. I resized the window here to show the scrollbars: